skip to main | skip to sidebar

Hey, remember when I trash picked a Steiff bear? Finally sold him for $100. Why, if I do this every day, I'd have a career going! 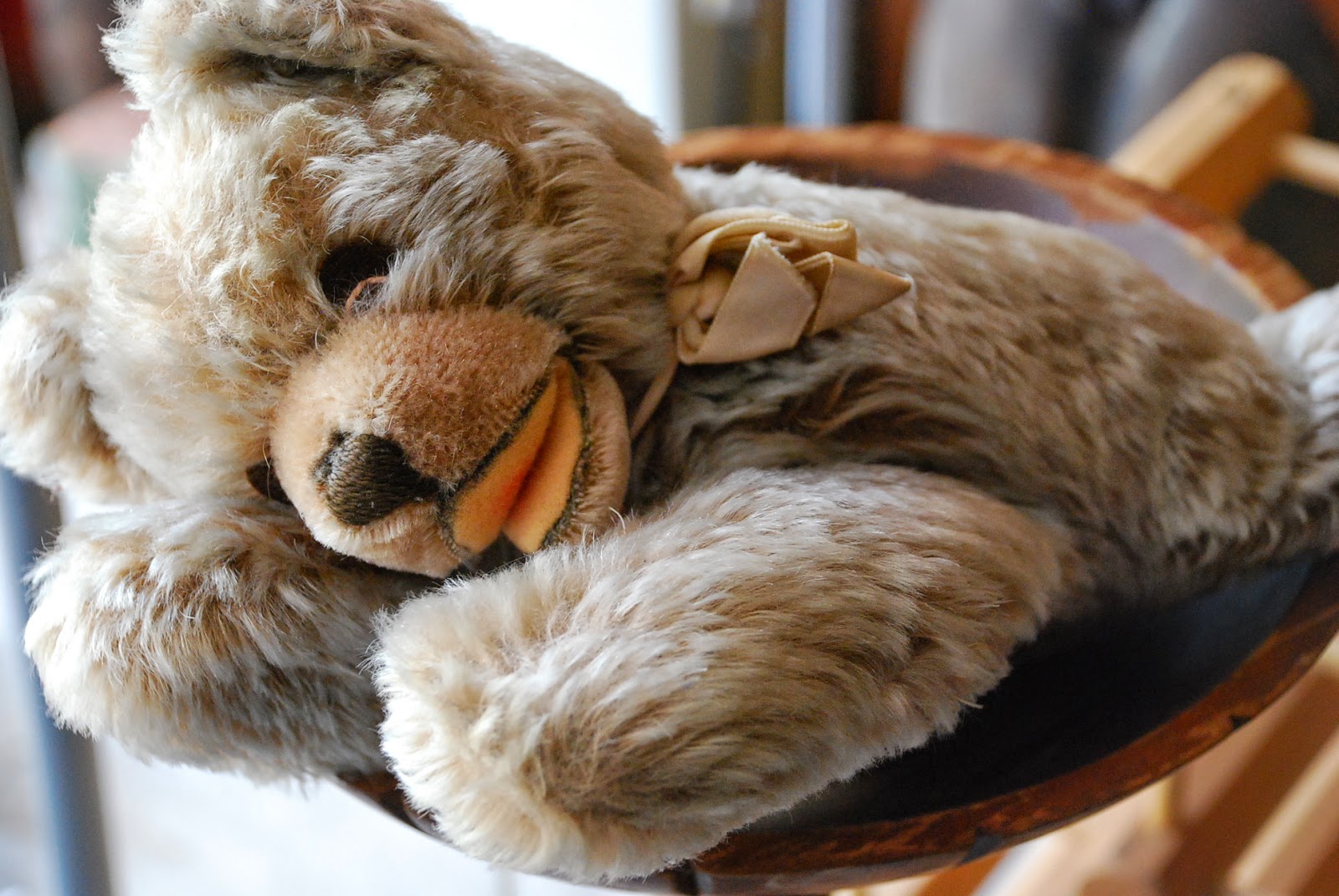 It was another gorgeous day. Due to multiple kid activities, I was only able to go pick for about two hours. Enough time to fill the minivan, not enough stuff to cause a divorce. Success!

So, I don't think I've mentioned this before, and I'm not usually one of those wacky "energy in the universe goes where it is called" (or whatever. I can't even fake this.) but every year I think of a few things I'd like to find, and I'm generally pretty happy with how it turns out. One year it was benches. I got several. This year I went with picture frames, large planters, and limestone slabs for the garden. Hey, two outta three. I'll take it.

Not shown: items for possible entries for the annual book club white elephant gift (and ooooh I got some doozies), ugly ornaments for that party, and two very nice hardback books that I gave my dad. They looked unread, marked as $35 each. One was Traitor to His Class: The Privileged Life and Radical Presidency of Franklin Delano Roosevelt. The other one was Thomas Jefferson: The Art of Power by Jon Meacham.

Oh, I also re-curbed a whole box of Easter decorations that I decided I didn't want after all. They were gone within the hour. 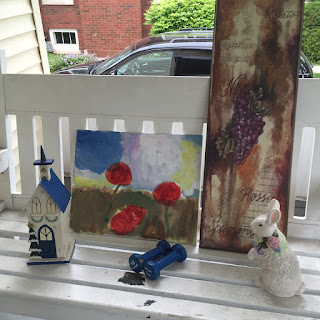 I stopped by my friend's house. She couldn't come with this year. Due to kid activities, what a coincidence. These are the items I wanted to leave on her porch as a surprise, but darn it, she was home. Beautiful objects d'art and some 3 lb weights (little joke from last year). 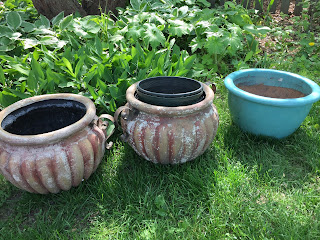 Three planters. The turquoise one is pottery, but the others are plastic. 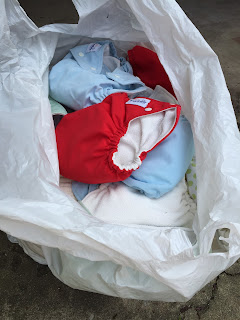 Giant pile of cloth diapers. Now, I know it's treading the line on what's socially acceptable to trash pick. They were clean and ready to sell! There were 24 in the bag, along with extra inserts and 2.5 packages of disposable diapers. What kind of world do we live in where it's acceptable to throw out cloth diapers? Shame on you, person who couldn't be bothered to Freecycle them. 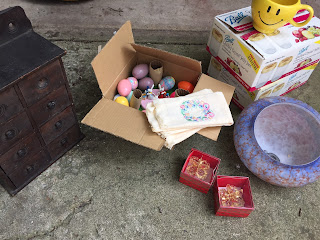 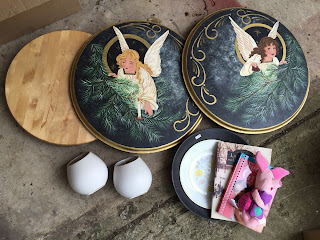 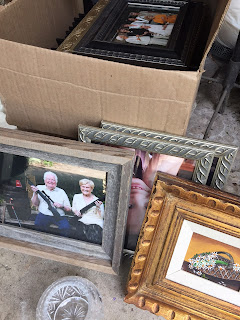 To think on the way to trash picking I was going to buy a picture frame! It is to laugh. That whole box is full of frames. All with actual family photos. Extra style points to the freaks posing with guns. Crystal candle holder in the front. 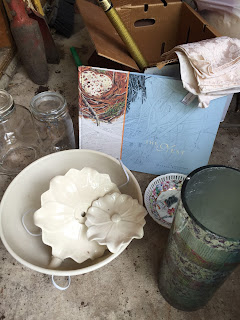 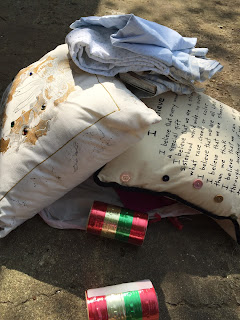 Some fabric I want to do crafts with, three new holiday pillows that I will use as inserts to more attractive covers, and Ye Olde Holiday Ribbon. I haven't bought gift wrap in years. 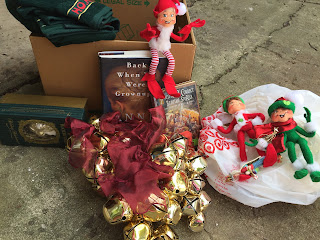 Two more books, a buttload of Christmas crap. Some hidden because there may be an Ugly Ornament winner in my future after all. Holiday hand towels. 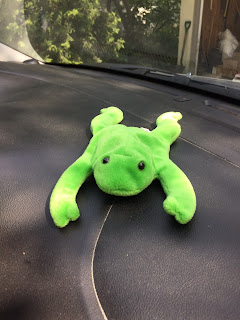 And since I didn't have a real friend to pick with this year, I found one and installed him permanently on my dash. Please give a warm welcome to Froggy Dash. He's my buddy.
Posted by Bluestem at 12:03 PM 1 comment: Links to this post

Continuing in the theme of "oh, yeah, that happened a bit ago," here's what our Easter egg hunt looked like this year.

The kids are now 13.5 and 11.75 years old. Roughly. Nea asked whether we were having an egg hunt this year, which was a reasonable question, as we have been out of town for at least the last 3 Easters. It’s been awhile. I wanted to mix it up a little, since they aren’t quite as excited about candy as they were a few years ago. Boo has braces, so that also complicates sugar consumption.

So I cut out 11 pink paper squares and 11 yellow. Put those in 22 of the eggs. Filled the rest of the eggs with some candy. It was pretty wet out, so we hid the eggs in the house. Oma and Opa helped. Boy, Opa wanted to make finding the eggs super difficult!

Once they found the important clue eggs, they had to unscramble the letters to find their Easter baskets.
If you want a little brain teaser, these were the two sets of clues. (answers at bottom of post)

Oddly, Boo had a bit of trouble finding hers (pink clues). I didn’t think that part would be particularly challenging. It was under a reusable grocery bag in the back. 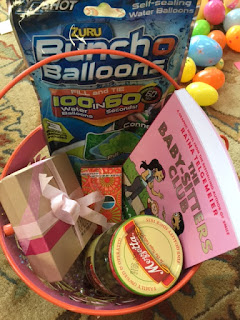 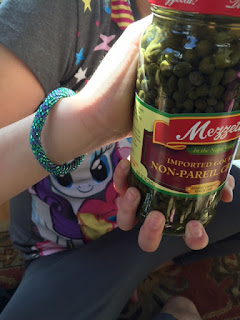 This is Nea’s basket. A wrapped present from a local boutique (beaded bracelet, seen in second photo), a giant jar of capers, a book, self-sealing water balloons (sort of a gift for me, frankly, knowwhatImean, fellow parents?!), and gum. She’s been eating the capers as a snack, in a bowl with a spoon. As one does. 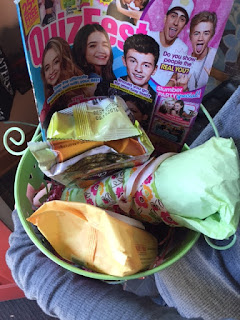 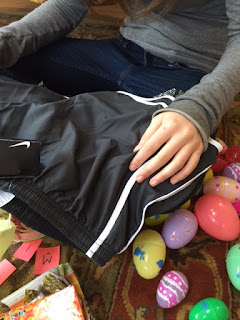 [answers to the word scramble] 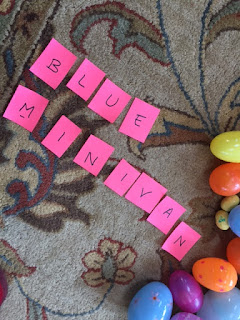 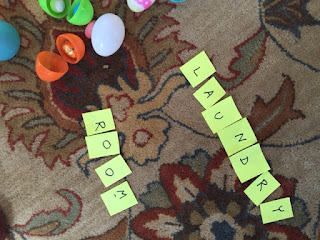 Posted by Bluestem at 9:52 AM No comments: Links to this post

Oh, how we love ugly ornaments! Oh, how difficult it is (much more than you might think) to find a real contender! Sure, the stores are full of normal ugly, but the truly awful are very rare. I would know, because I look for them all year. You'd think garage sales would be full of them. But no.

Updated to add a link to this related Cracked article. I don't care what anyone says: I sort of like #3. 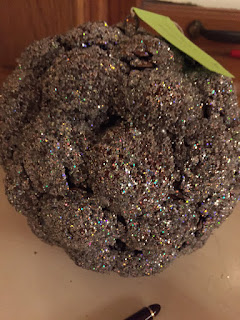 Here's what I brought to the table: Christmas Herpes. So named because, as we know, "Glitter is the herpes of the crafting world." I trashpicked it, naturally, so no backstory on why anyone would glue a bunch of pine cones together and then cover it in holographic glitter. What the photo doesn't show is how heavy this monstrosity is. Truly a fail. Extra points for also, again, failing to be ugly enough to garner very many votes. I'll never win my own party, sniff sniff.

For the others, let's go in reverse order. First, some bad honorable mentions: Little Drummer Boy and Leder-HORSE-n (obviously pandering to the German unicorn vote, that one). 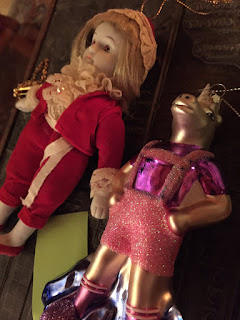 We can all agree, no?, that they are unfortunate. But not bad enough, sorry.

Next, the one I voted for. I love it! It's "A Very Troll-y Christmas." I believe there's some sort of troll movie coming out, so points for relevance. Also, it's a nice riff on the Easter Egg craft thing, as it's the same shape as those traditional sugary Easter delights. It only lost by a vote or two. 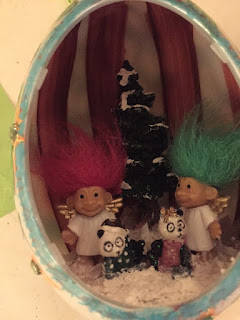 And lastly, the winner, which is worse in person than what you see here, aptly named "Orange You Glad This isn't Your Ornament?" It's half a painted coconut with weird seed pods stuck on it. Except the one on top apparently wasn't glued enough, as it didn't make it to my house. 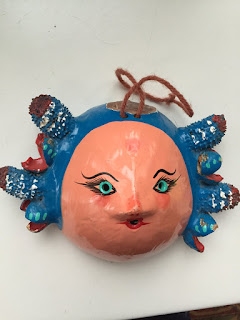 And there you have it. Another ugly ornament party in the record books. Hope you enjoyed this installment of "oh, yeah, I have a blog, oops, forgot."


We're just going to move forward and ignore the fact that this update is super late, kthanksbye.
Posted by Bluestem at 2:01 PM No comments: Links to this post

Some say it's a Dr. Suess quote, but who knows. 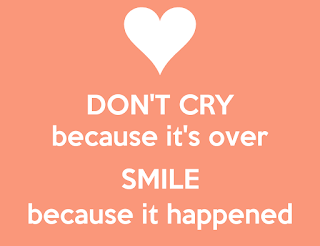 Posted by Bluestem at 10:23 AM No comments: Links to this post

To think it’s been so many years of joyful trashpicking already. New partner in crime this year, the lovely Kim, who was super accommodating and fun! She says she had a blast. Her haul included some wicker furniture, a cool Paris painting, a super-excellent old metal "potting soil" box, and some other stuff. I forget. 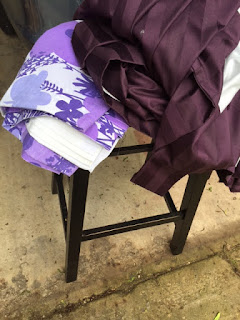 The annual purple parade that our town throws every spring was almost upon us, so I had purple on the brain. First up, purple curtains and a purple floral sheet, both of which I used as tablecloths. Was festive! Those are both on a dark stool that I haven’t quite found a home for yet. 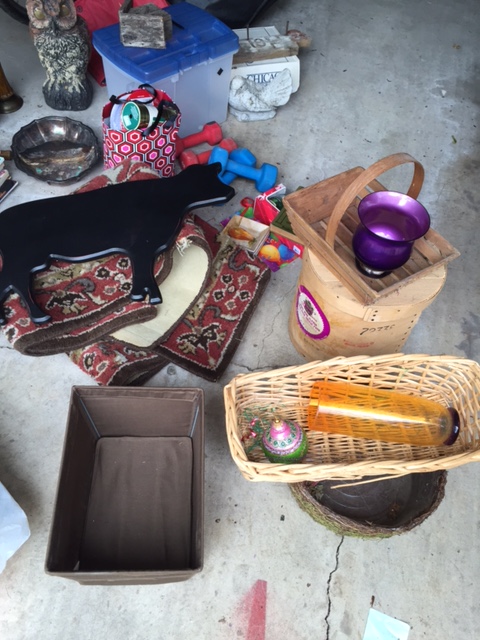 Here we have a medley of lovely objects. Starting clockwise from the owl, one of those garden owls that are supposed to scare off rodents and birds. Doesn’t work for crap, but regularly scares the crap out of me, as I round the corner of the garage. I’m high-strung, apparently.

Funny story about the hand weights. I like to set expectations a little before starting. “What do you hope to find this year? What is your quest?” I told Kim I was looking for some 5 pound weights (and purple stuff for our upcoming purple party). She was extremely impressed when I spotted these at 75 meters, athletically leaping out of the minivan with a joyful cry of “5 pound weights!!” She didn’t really know what was happening until she saw my score. Five pound weights. Boo-yah. Also, 8 pound weights, but I already had a set of those.

Handy bin, rustic ornamental birdhouse, dove, and sign (close-up below). Also a box of seashells, which might go to an art project. If not, I know an art teacher or two.

Various baskets, a PURPLE party-lite vase/candleholder. A vase with the $59.99 price tag still on the bottom.

Pottery barn rug, currently in the room where I work. It’s very nice. Washed it down with the hose in the driveway first. 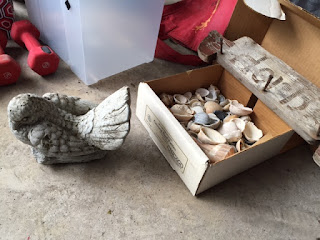 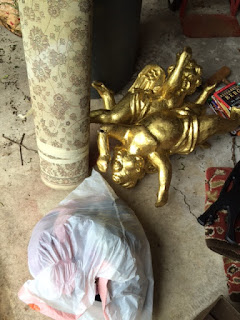 Two gold cherubs, which I will use with Christmas lights on the porch this winter. A bag of mostly Gap clothing, some of which I kept, some went to charity. A rug that we couldn’t save. Someone else took it from our curb. Hope they had better luck. 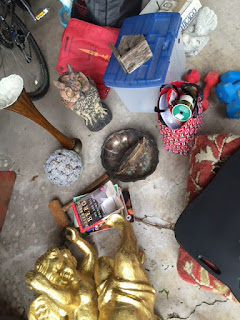 Different view, including a stack of books. 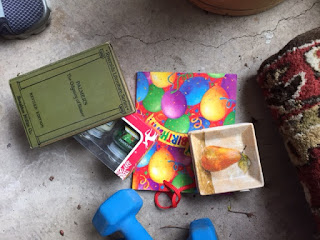 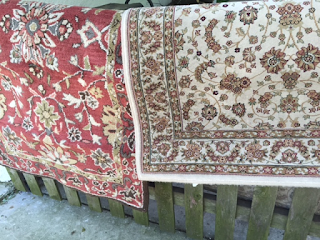 Better shot of the rugs, both good and bad

Posted by Bluestem at 3:18 PM No comments: Links to this post

Hi. Wow. It's been a while, huh. And this will also be a lame short entry.

Don't have the full report yet, but we did neuropsych testing on Nea again. She's nearly 11 now. The last time was four years ago, in first grade. Since she's about to go to middle school, it's that time again. And we will do it again in high school, sophomore year, to make sure her accommodations will be current for college.

Short version: working memory is still a big issue. She also has vision tracking problems, which no doubt are apraxia-related. Should have gone to that seminar I skipped. Damn. Contacting the people I know who ran that, though, so I hope to obtain a copy of the presentation. Or at least some names of decent eye doctors.

Another thing on the summer's to-do list: get a better hearing test for Nea. Have the name of an audiologist recommended by a friend.